The Annual General Meeting of the Friends of Dundonald Park will be held in the Dundonald park pavilion  on Thursday 11th July at 8.00pm.

A full agenda will be published in the next few days but topics  include:-

# creation of the  Dundonald nature reserve


Please do come as the more people attend then the more we can do to protect and enhance the well being of the park.

The Committee of the Friends of Dundonald Park.

A welcome to all was given by SD. The friends group was set up some eight years ago to help protect and enhance the Park.  It was agreed there has been an overall improvement to the Park with the addition of over twenty trees, hundreds of bulbs, reduction of graffiti, less litter and a much safer and welcoming environment.

ASgave a report of the Income and Expenditure for the year ending 31st of March 2011. The Friends have a credit bank balance of £2069.

It was agreed to donate £600.00 to the council to offset the cost of trees given.

Metropolitan Public Gardens Association has given the Friends a one off grant to purchase a picnic bench.

David Lofthouse, the tree specialist, at Merton Council has confirmed he has no budget for trees this year.

In 2011 the Council applied for a Green Flag Award for Dundonald.  Unfortunately the Park failed for a number of reasons these included; the lack of natural planting, quality of the pitches and the uncertainty of the Park due to the proposed expansion of Dundonald  Primary School.

The council has now replaced the fence along Dundonald Road and the Rose garden which not only looks nice, but will also act as a deterrent to entering after dusk; when the gates are locked.

It was pointed out that Cottenham Park has just had their new fences stolen by metal thieves.  Could people watch /listen out.

The gates at this entrance are to be replaced shortly with double access gates for vehicles and a new pedestrian gate.

A pre application consultation has just taken place to expand the school from one form of entry to two i.e. doubling its capacity.

A pre application on plan C finished on 8th January 2012?  It is thought the full planning application will go ahead in February 2012.

As far as we are aware the council has not applied to the Upper Lands Tribunal to overturn the Covenant, which is in place to protect the Park.

The Friends were made aware that there is a group set up who are against the building on the protected Park; they are called Protect Dundonald Rec.

It was discussed with the Friends if we should move away from a neutral stance. It was agreed that as it was such a small committee that a survey should be carried out to find the opinion from the whole group of Friends.  A survey will take place very shortly to everyone on the mailing list of the friends.

Minimizing Impact if the Expansion goes ahead

The friends would like to see tree compensation; to date there has been no word on how the council would compensate the Park.

It was suggested that the Council should let the Friends have a copy of the written method of work for the build.

The Friends have now completed an Avenue of Oak trees parallel with Dundonald Road. They are also going to work with Jane Plant (Merton Tree Warden) and in February do some soft planting including Dogwood, Hazel and Guelder Rose?? which should be low maintenance.

It was agreed that we should try and recruit some new members to the friends.  At present we have 200-ish members on our mailing list.

Stewart Dow agreed to stay on as Chair, Anne Dawson to remain Secretary, Adam Slee to be Treasurer and Paul Gibson to remain a Committee member.

The toilets are now closed, unless there is a park keeper onsite i.e. when there is a football/cricket match.

We, as Friends, do have a key to open them but should we be responsible for opening/closing and who would clean them?

The nets are up in the tennis courts and are available to play on at all times of the day for free.

Could the Council put up a notice to that effect please as there seems to be some confusion?

Parking in the Park

This topic comes up every year.  It came to a head a couple of weeks ago, when one Saturday afternoon the footballers parked on the area planted with bulbs.  The lady volunteer who opens up the park gates each morning, (the Council still locks up the park at dusk) now locks the double gates on Fairlawn Rd; thus stopping parking. Teddies has a key and parks in the par, but do lock the gates to stop parking.  The child-minders are upset as they were not told that they could no longer park in the park.

The Council need to advise all what the rules are.  SD to clarify this matter.  Also if there was an emergency could the Ambulance/Fire brigade access the park. Also how do contract cleaners enter the park to service the Pavilion?

It was also commented on that the council parks staff are driving round the park in their lorry when emptying bins and leaving tyre tread marks on the grass.  Tom the previous park keeper had an alligator truck, which fitted onto the path and was much lighter when on the grass.

S.D. suggested that a rota will need to be set up to water the new trees planted.

We have six?? Bat boxes and an insect hotel(located on the wall near to Fairlawn Road) made by the BCTV??

SD. to chase the council to have them put up.

SD to put up the maintenance program from the Council on the website.

It was also brought up that the paths were not been cleared.

Also discussed the cleaning of the Pavilion could be improved if the correct provisions to clean were supplied.  There was often a lack of toilet rolls and cleaning fluids.

There is as always the problem of litter been dropped- has the council got any suggestions signage ideas to combat this problem?  What tried and tested methods work elsewhere, summer and the nice weather are the worst times.

A mum with toddlers asked if it was possible to put in extra seating in the playground.  It was not possible to answer this till we know the outcome of the school expansion.  It was also brought to our attention that a parent was worried about the position of a boulder under the tree in the sandpit, could it be repositioned? SD to ask the council.

It was noted that there is a real problem with people bringing their household waste and putting it into the Park bins.  How can this be stopped? SD to refer this to the council.

Would it be possible for the council to get bins in the storage area that are fox proof?  The foxes are digging out litter and bringing it into the park.

The re-cycling bins at the Fairlawn Road entrance are not been emptied at all. There is no signage to actually say that they are just for recycling and consequently all rubbish is put into them but the Council is failing to empty them, is there a solution or would we be better getting rid of them altogether?  SD to refer to the council.

The Friends would like to thank Avril Park for opening up Dundonald Park every day of the year whatever the weather; perhaps the council could thank her too.

It was agreed that the Friends should meet in mid June 2012.

The meeting was then closed at 9.45pm 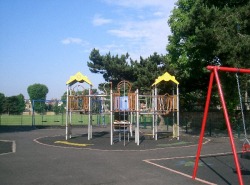